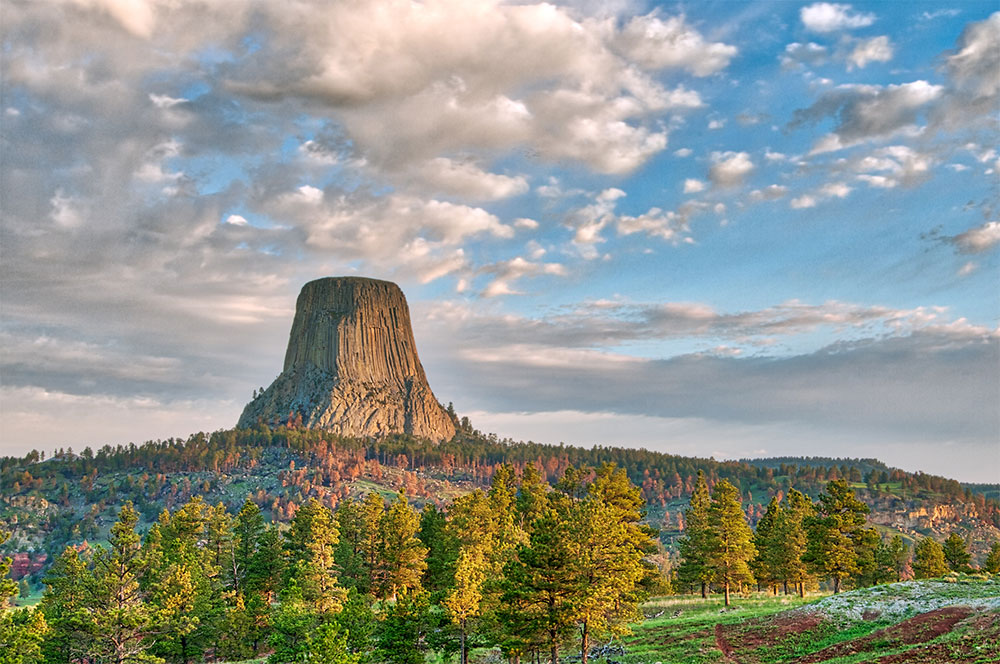 Devils Tower is home to the first national monument, Devils Tower National. Established on September 24, 1906, by President Theodore Roosevelt. . Devils Tower is a butte, possibly laccolithic, composed of igneous rock in the Bear Lodge Ranger District of the Black Hills, near Hulett and Sundance in Crook County, northeastern Wyoming, above the Belle Fourche River. It rises 1,267 feet above the Belle Fourche River, standing 867 feet from summit to base. According to the Native American tribes of the Kiowa and Lakota, a group of girls went out to play and were spotted by several giant bears, who began to chase them. In an effort to escape the bears, the girls climbed atop a rock, fell to their knees, and prayed to the Great Spirit to save them. Hearing their prayers, the Great Spirit made the rock rise from the ground towards the heavens so that the bears could not reach the girls. The bears, in an effort to climb the rock, left deep claw marks in the sides, which had become too steep to climb. Those are the marks which appear today on the sides of Devils Tower. When the girls reached the sky, they were turned into the stars of the Pleiades. Today hundreds of climbers scale the sheer rock walls of the Tower. The 1977 movie Close Encounters of the Third Kind used the formation as a plot element and as the location of its climactic scenes. Its release was the cause of a large increase in visitors and climbers to the monument.  Wildlife is in abundance in the town of Devils Tower including; elk, deer, turkey, praire dogs and other predator animals.  The population of Devils Tower is 155.  This is mostly a ranching community nestled in the Black Hills of Wyoming.   Public Education is part of the Crook County School District #1.  There are restaurants and shopping located at the tower and at the entrance of Devils Tower along with a campground overlooking the tower.  Devils Tower has a post office located inside the KOA campground.
Beds Baths Sqft
Details
Beds Baths Sqft
Address
Price
Beds
Baths
Lot Size
SHARE THIS:
error: Content is protected.
Skip to content